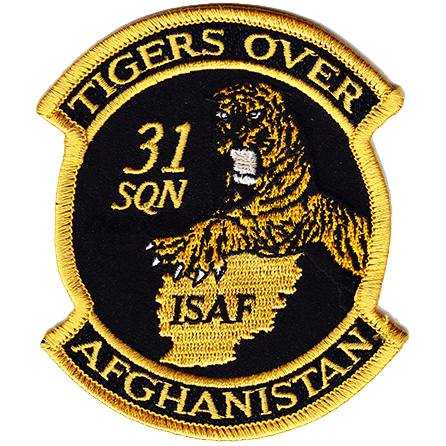 Since 2008 Belgium is participating in the ISAF (International Security Assistance Force) operations from NATO in Afghanistan. Initially with four F16’s and now operating with six F16’s, this Belgian participation called “Operation Guardian Falcon” (OGF) is currently still ongoing and our presence shows that a small country can also share the burden by taking its part of the responsibility as a reliable NATO member. The 31 Tiger squadron is one of the four squadrons in the Belgian Defense that participates on a rotary basis of two to four months with its colleagues of other squadrons to guarantee the presence of a permanent operational team of pilots and support personnel on base.

The airbase of Kandahar (KAF) is used by civilian and military air traffic, military traffic being the most significant. KAF currently has the busiest single runway in the world. All types of transport, fighter and unmanned aircraft daily perform missions over whole of Afghanistan. Needless to say pilots have to be up to speed with their knowledge and pilot skills to be able to perform their missions safely in this dense airspace.

This summer, the 31 Tiger squadron was partially deployed for two periods of two months. For each deployment six pilots performed missions in support of ISAF. The main tasks being to provide Close Air Support (CAS) to ISAF ground troops as well as gaining Intelligence, providing Surveillance and Reconnaissance (NTISR). During summer time weather conditions are quiet extreme which makes operations challenging for aircrew as well as ground crew.

Prior to a mission pilots study the published special instructions (SPINS), Aeronautical Information Publications (AIP’s), Notices To Airmen (NOTAMS), Airspace Coordination orders (ACO’s), Air Task Orders (ATO’s), Standard Operating Procedures (SOP’s) and Rules Of Engagement (ROE’s) all specific to this theatre, while a whole team of mission planners, ground liaison officers, intelligence officers, technicians and many more are providing excellent work in their own domain to make the mission possible.

The main tool used for ground scanning is the “Sniper pod” allowing to see very accurately during day and night. Another great capability is the ability to send the image displayed in the cockpit to the “Rover” on the ground by video downlink. This eases the accurate work between the JTAC (controller on the ground) and the pilot.

Per day we plan on one “day wave” and one “night wave”, each flown by a two-ship. Another two-ship is permanently “on state” for at least twelve hours a day if needed for quick reaction or intervention in the whole area. Flights can take up to five hours, sometimes needing four air refueling slots to stay airborne, but most of the time we return to base after two hours. After a shift working in the air-conditioned containers on the “operational side of the base” the whole team of pilots, crew chiefs and assistance personnel is relieved by a new team ready to prepare and execute the new “taskings” of the second wave and QRA.

Arriving in the R&R (rest and relief) personnel have the chance to consume a non alcoholic beverage, play some ping pong or just to read a book giving them some relief from the stressful job they sometimes need to perform. There are around 30000 people on base all living in their own secured zone on base. The NATO-gym and dining facilities are the most common places to see and meet other nations all working in support of ISAF. Life in KAF surely is something special, but, thanks to the daily intensive training in Belgium and the almighty Tiger spirit, the Tigers successfully perform this mission year after year and as long as it is required. Tiger Tiger Tiger!