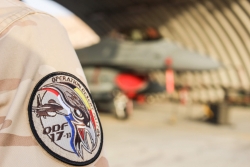 Since the beginning of November, 31 Tiger Squadron is deployed again in the Middle-East, in order to execute combat operations against Daesh in both Iraq and Syria. For the moment, we are not the only Tigers in the region, since we have our fellow Tigers of 11F and 02/030 stationed just 50 Km from our Belgian DOB (Deployment Operating Base).
“Tiger 31, clear take-off” is how every mission starts over here, a mission that will typically take 5 hours. 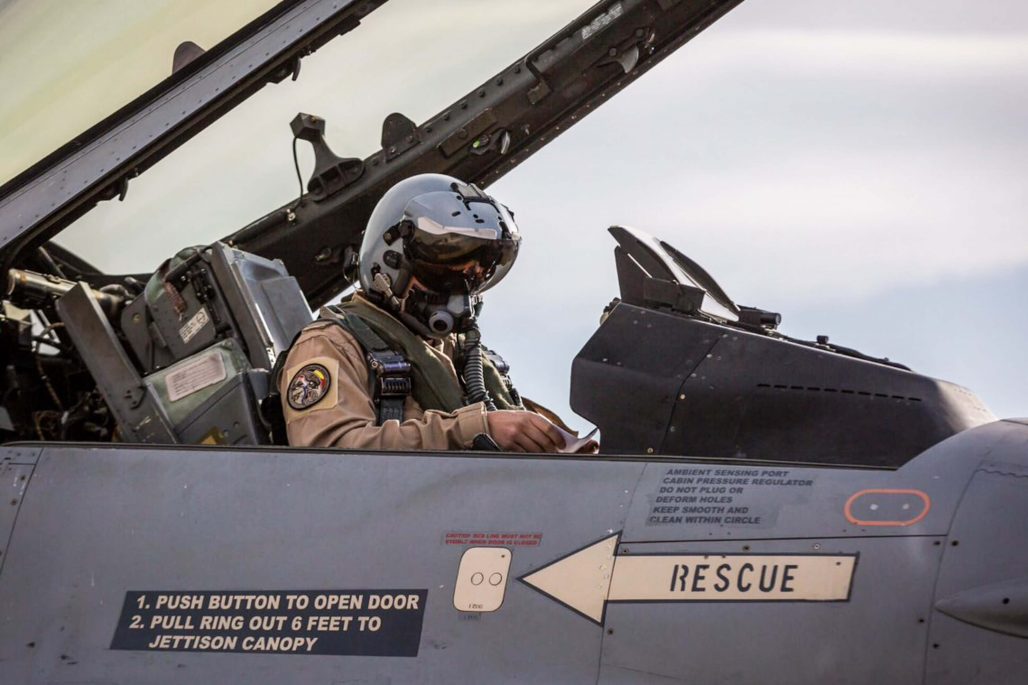 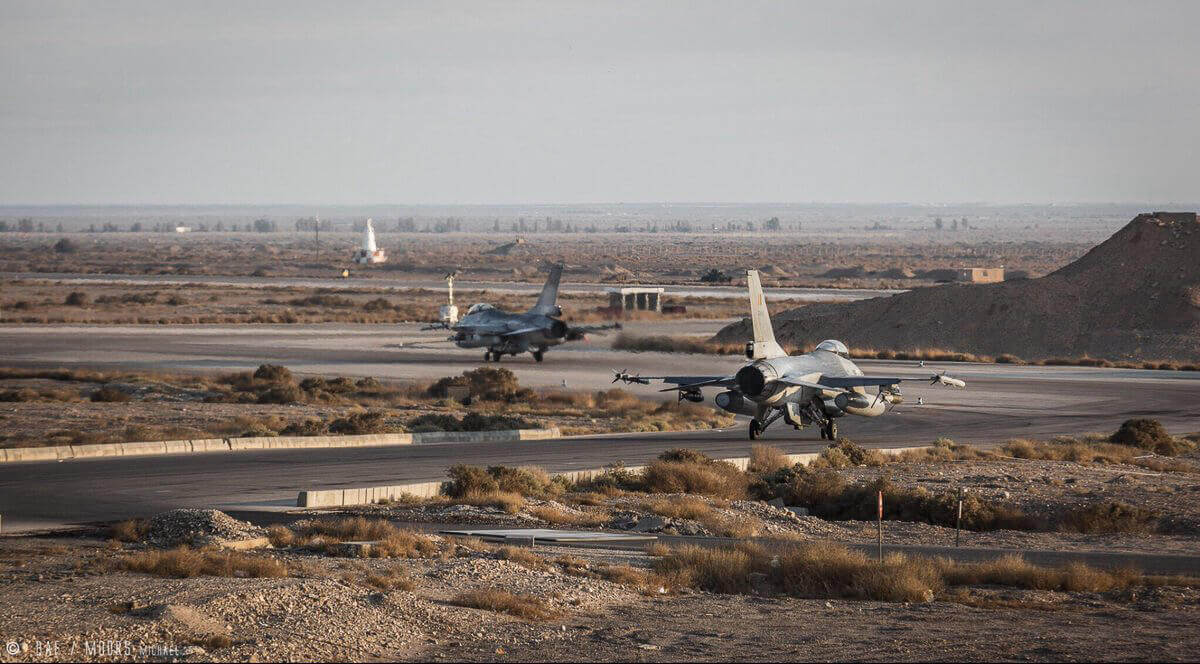 Once airborne, the pilots verify all their systems including: identification-, self-defense- and weapon systems. All of this happens in the 20 minutes travel from our operating base to the Iraqi border as from where the jet needs to function perfectly.
After roughly 1 hour of flight, the F-16’s reach their operating zone, where they will work in close coordination with the group troops for approximately 3 hours. The airspace is pretty congested since a lot of other jets are performing operations in that same area as well, so good communication and organization is paramount! 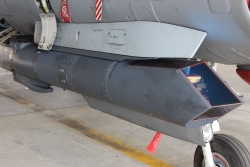 The two main tasks our aircrew execute are NTISR (Non Traditional Intelligence Surveillance and Reconnaissance) and CAS (Close air Support).
When the pilots execute a NTISR-missions, they receive – via the secure radio-  multiple “Points Of Interest” that need to be observed and monitored with the use of or our “Sniper Targetting Pod”. This is a very performant infrared and optical sensor which is also used to guide the laser-guided weapon to their target. 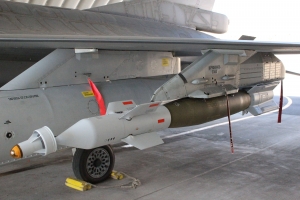 If hostile forces are detected, or ground forces are under fire, the “recce” mission switches very quickly to a “CAS”-mission. At that stage, pilots will be asked to employ weapons against the enemy forces. A standardized format is voiced over to the pilots by a specialized ground controller (JTAC or Joint Terminal Attack Controller) embedded in the ground forces. This message includes the coordinates of the enemy forces, the nature of the threat, distance to friendlies etc… While the pilot in the cockpit is trying to bring his eyes on the enemy forces and preparing for his attack, the “Red Card Holder” assess whether the attack is lawful and in accordance with our national rules of engagement.

When all pre-conditions are met and all parameters are in the green, the pilot will get the call: “Tiger 31, clear hot!“, meaning he can prosecute the attack. Once the clearance is given, the pilot will run one last time through all his checks and he will put the Master Arm switch to Arm. As from that moment, when he presses the red button or “pickle”, a weapon will be released from the aircraft. 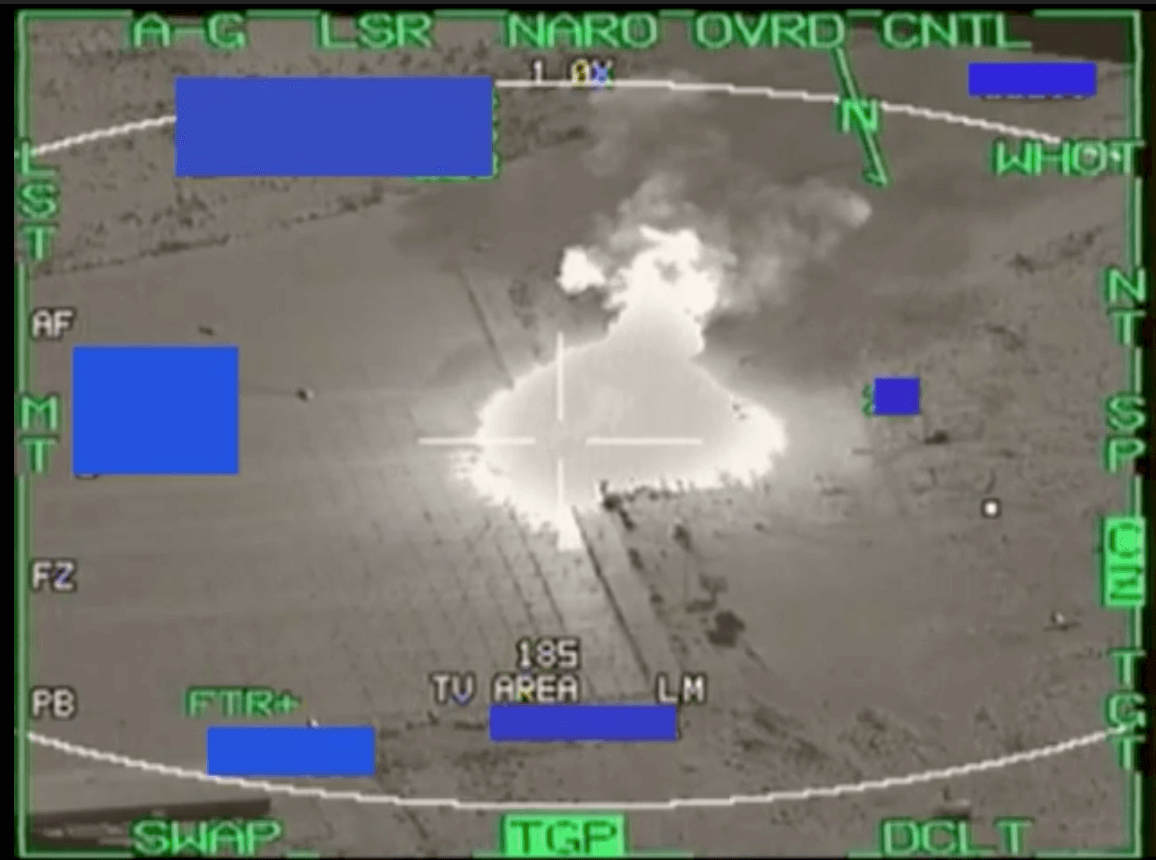 When weapons are employed, avoiding collateral damage is of the utmost importance. This is done using specific procedures and all the technical goodies of the F-16. The collateral damage will in the first place be minimized by the use of precision guided weapons (laser- or GPS- guided). Thanks to the “video datalink” included in our optical sensor, the ground forces get to see the same images as in the F-16 which is at about 5 km from the target, whilst the pilot gets the confirmation (via radio) that his systems are aimed at the correct target. 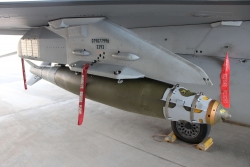 For the use of GPS-guided ammunition, there is a very strict communication protocol that needs to be used: The pilot will repeat the coordinates over the radio and his read back needs to be 100% correct. Another method to minimize the risk of collateral damage is adapting the functioning of the explosive charges. For example, if the weapons are being detonated a couple of meters under the ground, the effects will be significantly smaller and damage to structures that shouldn’t be hit will be avoided. Last but not least, in the most critical area’s there are permanently RPAS (Remotely Piloted Air Systems) airborne who help to observe the target and its environment to estimate the collateral damage risk. In any case where it gets tricky we have one rule: “If there is doubt, there is no doubt!” Meaning if we are not 200 percent sure, we will not drop.

Normally, our F-16’s stay overhead the area of operations for about 3 hours, but on request of the ground commander this can be prolonged. The current longest operational flight over Iraq is 7 hours and 30 minutes. One can imagine the fatigue after such a long flight. In normal circumstances, the pilots fly back to our DOB after the 3 hours of on station time and will land after approximately 5 hours of flight. 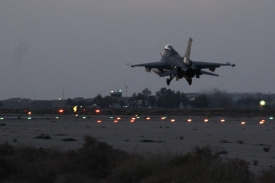 At landing, the mission is not over yet. Once back in the operations center, the pilots will “tell their story” to the intelligence officers, who will transform this into a detailed mission report, containing all the important moments of the flight. They will send this report to the command center in Qatar. If the pilots went kinetic (meaning they delivered weapons), there is quite some extra work to do. In that case, the pilots will make a detailed report of each drop to show the Air Operation Center and our National HQ the effects and validity of the attack. Recently we passed the milestone of 9.000 operational flying hours over Syria and Iraq, an accomplishment that could only be achieved thanks to our good training, the good support from our detachment and the professional international cooperation!