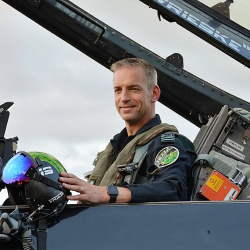 Vrieske started his career in PROM 90B and got his wings in 1992. He has therefore been a fixed value at Defense for more than 30 years. After the Marchetti and Alpha Jet he always flew on F-16. Arriving in KeeBee in 1995, he was taken under the wing of the 23rd Devil Squadron as a young pilot. He quickly acquired the flying skills and became a pilot with the 31st Tiger Squadron after the dissolution of the 23rd. Vrieske took part in almost all operations where our Air Force was present since the mid 1990s. Bosnia, Kosovo, Serbia, Afghanistan, the Baltic States, Iraq, Syria, …! Few major International exercises still hold secrets for him. Tons of experience, full of energy, sense of precision, always ready and deployable… in short, a very good profile to represent our Air Force as a demo pilot. 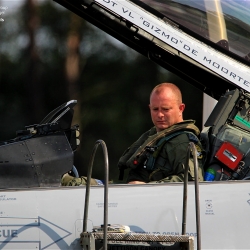 Gizmo joined the Belgian Air Force in 1996 and started his standard pilot training at Beauvechain Air Base with prom 96A. After completing basic flying training on the Alenia Aermacchi (formerly: SIAI Marchetti) SF-260M/D and basic jet training on the Dassault-Breguet/Dornier Alpha Jet 1B, he received his pilot wings in 1998. He then went to become a C-130 pilot at Melsbroek Air Base but returned to Beauvechain Air Base 2 years later as an Instructor Pilot on the SF-260. “Gizmo” started his conversion training with the Operational Conversion Unit (OCU) at Kleine Brogel Air Base in 2005 and began flying Lockheed Martin F-16s. He joined 31 squadron at Kleine Brogel Air Base in 2006 and became the Wing Aviation Safety Officer (WASO) there in 2013. He has over 4,400 hours flying of which around 1,500 hrs on the F-16 MLU. Since 2015 he is the Belgian Air Force F-16 Demo pilot. 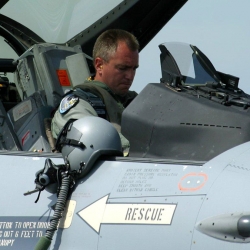 John entered the Airforce in 1989 and earned his wings in 1992. He became an instructor in Goetsenhoven afterwards to teach student pilots to fly the Marchetti SF-260M/D. He also was a wingman in the Swallows formation team during the seasons '95-'96-'97, good for 75 demonstrations in Belgium and abroad. In 1998 he converted to the F-16, initially in the 23 Devil squadron, and later on in the 31 Tiger squadron when both squadrons merged. During his time as a Tiger het got selected for the airshow demo pilot starting in 2003. His first years as a demo pilot he flew 18 airshows. By the end of the year he collected 3,500 flight hours, of which 1,000 on the F-16. On October 28th 2005, John 'John' Vandebosch performed his very last demo in front of his colleagues and team members on his home base Kleine Brogel. John flew three full airshow seasons as Belgian demo pilot and this job brought and a lot of work and sacrifices. Besides being a demo pilot he also had to fulfil his daily job as a fighter pilot. Over those three years John flew dozens of demo’s and went from the south of France to Greece and from England to Poland and so on. After his last demo at Kleine Brogel, a small ceremony was organised upon which John received a well deserved ‘Job well done’ from his colleagues. But not only his colleagues told him it was a great job he had done, almost at every airshow John received very good comments and people were always amazed with his performance and the amount of skill he demonstrated  as a presentation pilot. 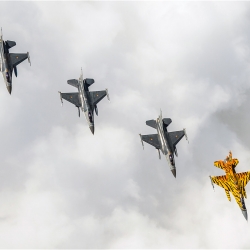 A recurring tradition ensures that Kleine-Brogel, and then 31 Sqn in particular, contributes for the show at the annual International Airshow Sanicole. A four-ship Tigers invariably rumbles through the air at this event.